[The Chronicles of Riddick]From Slow and Steady Progress to Fast & Furious Blockbusters, Vin Diesel’s Net Worth Is Massive

No Wonder He’s Happy (Gilmore)! Adam Sandler’s Net Worth Is Staggering50 LGBTQ Trivia Questions and Answers to Honor LGBTQIA+ Communities During Pride and BeyondFrom Teen Crushes to Couch Jumping, Tom Cruise’s Dating History Has Been a Heck of a Ride 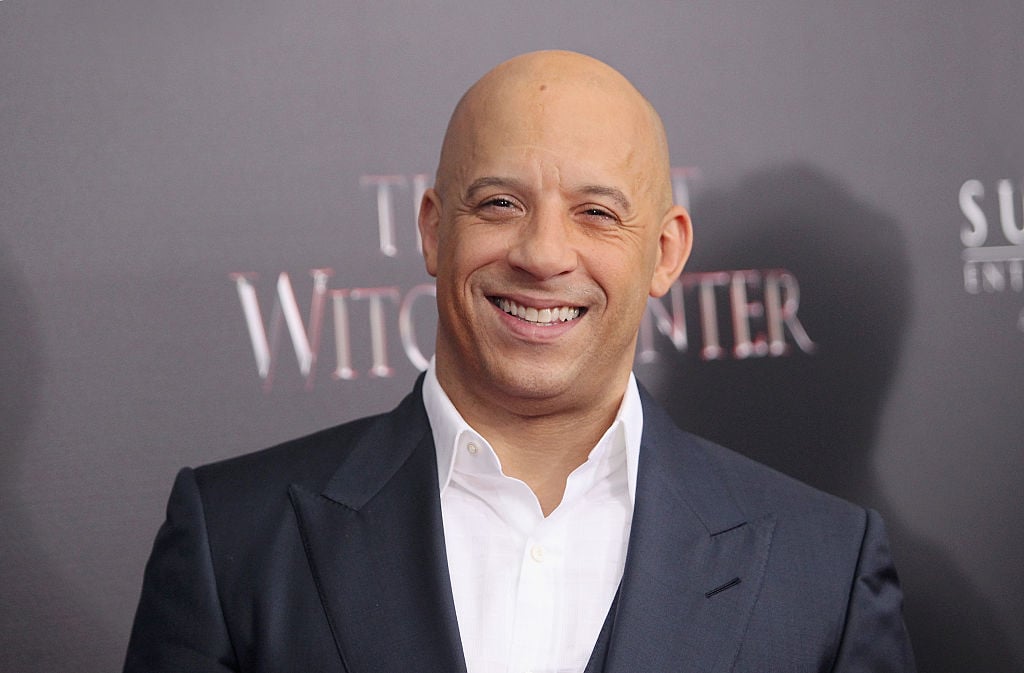 There is more to Vin Diesel than the Fast & Furious franchise, but we wouldn’t blame you if you know him mostly as his Fast alter ego, Dominic Toretto. However, he’s also a producer, a musician and a director who got his first big break from a huge movie icon. He’s also a private guy who enjoys a relatively modest lifestyle, so it’s no wonder that all the zeroes in Vin Diesel’s net worth will probably shock you.

Diesel’s net worth is estimated to be $220 million—a number that will likely rise after the premiere of Fast 9 on June 25.

Diesel was born Mark Sinclair in Alameda, California, in 1967 and raised in New York City by his mother and his stepfather, an acting teacher and theater manager. When Diesel was 7 years old, he, his twin brother and their friends planned to vandalize a theater in New York City—but they got busted. Instead of getting grounded or going to juvie, the young misfits were cast in the theater’s production of Dinosaur Door. The experience stuck with Diesel and he continued doing theater for the rest of his childhood and young adult life, eventually studying creative writing at Hunter College in the Big Apple and applying those skills to scriptwriting.

Diesel eventually dropped out of college to pursue filmmaking full time, working as a nightclub bouncer to make ends meet. In 1990, he nabbed his first on-screen role as a hospital orderly in Awakenings. Five years later, he’d release Multi-Facial, a short film he wrote, produced, directed, scored and starred in; the film was autobiographical and centered around the struggles of being a multiracial actor working hard to break into show business. The short was a success: It screened at the Cannes Film Festival that year and caught the attention of none other than Steven Spielberg, who loved it. Spielberg went on to cast Diesel as Private Caparzo in 1998’s Saving Private Ryan. Diesel reportedly earned $100,000 for the part.

In between those projects, Diesel wrote, directed, produced and starred in the 1997 feature film, Strays. It was reportedly made on a budget of just $10,000.

Diesel got his first starring live-action role in 2000’s Pitch Black as Richard B. Riddick. The movie made $53 million on a $23 million budget, setting the stage for Diesel to cement himself as an action hero. The same year, Diesel starred in Boiler Room, which grossed more than $28 million on a $7 million budget.

His breakout role, however, came in 2001 with (you guessed it!) The Fast and The Furious. The first installment of the franchise cost just $38 million to produce and grossed a whopping $207 million worldwide, and Diesel reportedly made a cool $2 million for it. Later that year, he also appeared in Knockaround Guys alongside Seth Green; the comedy ensemble made $12 million against its $5 million budget.

Parade Daily Celebrity interviews, recipes and health tips delivered to your inbox. Email Address Please enter a valid email address. Thanks for signing up! Please check your email to confirm your subscription.

Related: When Will the Fast Franchise End? Will There Be an F10?

Lightening up helped Diesel: In 2005, his comedy The Pacifier raked in $199 million on a $56 million budget, putting him back in the black in terms of box office returns. His courtroom drama Find Me Guilty in 2006 was a box office bomb, making only $2.6 million on a $13 million budget, but it didn’t tarnish Diesel’s shine too much, as his performance as gangster Jackie DiNorscio was critically acclaimed despite the film’s other failures.

Hitman was a hit in 2007, making a whopping $101 million on a $24 million budget. It was a double-dose of success for Diesel, as he was also an executive producer on the project. However, he immediately followed Hitman with Babylon A.D., which only made $72 million on a $70 million budget.

Perhaps realizing an already successful franchise would be his best ticket back into long-term profitability, Diesel returned to Fast & Furious in 2009. It was a shrewd move, as the movie made $159 million on an $85 million budget.

Fast Five made a ton of money in 2011: It had a $125 million budget and earned $626 million at the global box office. Two years later, Fast & Furious 6 did even bigger numbers, with a budget of $160 million and $789 million in grosses.Despite The Chronicles of Riddick not doing gangbusters, its 2013 sequel, which Diesel also produced, made $98 million on a $38 million budget in 2013. Another sequel, Furya, was announced with Diesel set to return as star and executive producer.In 2014, Diesel made his debut in the Marvel Cinematic Universe as the voice of Groot in Guardians of the Galaxy. The movie had out-of-this-world box office returns, making $773 million on a budget of $170 million.Furious 7 broke all of the previous franchise entry’s box office records, making $1.52 billion (yep, with a b) on a $190 million budget.The Last Witch Hunter had middling returns in 2015, making $147 million on a $90 million budget. Diesel produced the film as well as serving as its titular star. A sequel was announced, but details are scant.Billy Lynn’s Long Halftime Walk was a box office disappointment, taking in $31 million on a $40 million budget.Diesel brought back another franchise in 2017 with xXx: The Return of Xander Cage, producing and starring in the $85 million flick. The movie brought in $346 million.The Fate of the Furious in 2017 also broke the billion-dollar mark, taking in $1.24 billion against its blockbuster $250 million budget.Guardians of the Galaxy Vol. 2 brought Diesel back to voice fan-favorite Baby Groot, making $864 million on a budget of $200 million. He voiced Groot in Avengers: Infinity War ($321 million budget, $2.05 billion box office), Ralph Breaks the Internet ($175 million budget, $529 million box office) and Avengers: Endgame ($356 million budget, $2.8 billion box office). Guardians of the Galaxy Vol. 3 is set for a 2023 release.One of the first films released in the COVID-19 pandemic was Diesel’s Bloodshot, which he also executive produced. It managed to make $34 million on a $45 million budget, which, given the circumstances of its release, is still somewhat impressive.Before Fast 9 even hit theaters in the United States, it already made $292 million overseas. Fast & Furious 10 (why wouldn’t they call it FasTen?) has already been announced. Diesel reportedly pocketed $20 million for Fast 9—ten times what he made for the first installment.Diesel has several more projects in the pipeline, including a film aptly called Muscle and Rock ‘Em Sock ‘Em Robots, and he’s slated to produce efforts including a Miami Vice TV movie, a TV series called Merc City and movies Soldiers of the Sun and Hannibal the Conqueror.

Related: Find Out How Fast & Furious 9 Will Feature Paul Walker

Diesel channeled his creativity a different way amid the coronavirus pandemic: Music! He released a song called “Feel Like I Do” in September 2020, and followed up with “Days Gone By” that October.

Considering his net worth, Diesel could be a bit more conspicuous with his spending. In 2000, he purchased a Hollywood Hills starter home for $562,000. In 2016, he listed the property, which has a pool, spa and dedicated meditation spaces, for $1.395 million. He also owns a home in the Dominican Republic.

Next, From Mad Max to Matrix to Mission Impossible, these are the 75 best action movies of all time!

It looks as though you’ve already said that.

You seem to be logged out. Refresh your page, login and try again.

You are posting comments too quickly. Slow down.

Your account was created. An email has been sent to you.

Get the Parade Daily:

health tips in your inbox.

Get the Pop Kitchen Newsletter: recipes and handy kitchen tips in your inbox.

Get the Healthy Now Newsletter: good vibes and health tips delivered right to your inbox!

Get the Pop Shop Newsletter: fabulous finds delivered right to your inbox!

conditions of our User Agreement and

Everything We Know So Far About America’s Got Talent Season 16, Including All the Golden Buzzers

Which One of These 100 Diets Could Help You Lose Weight? We’ve Got Tons of Info to Help You Decide

Dealing With an IBS Flare-Up? Here’s the Best Way to Treat It—and How to Prevent It From Happening in the First Place

20 Foods That Are Packed With Vitamin B, from Eggs and Grass-Fed Beef to Mushrooms and Leafy Greens